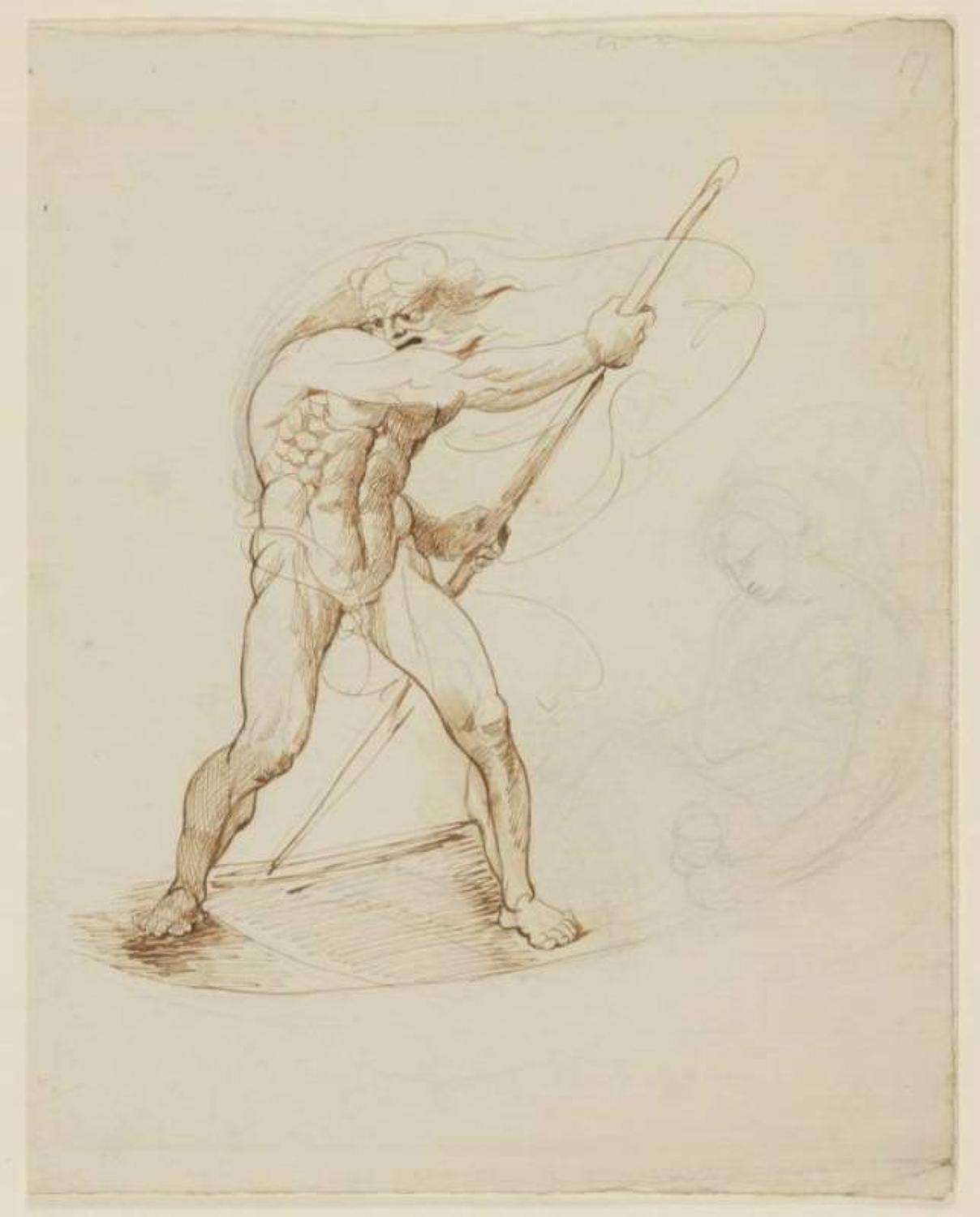 A Study for the Figure of Charon.

Drawing in pen and brown ink over black chalk. A first idea for Psyche being rowed across the Styx. There is another drawing by Romney at the Fitzwilliam Museum, Cambridge for the same project , which shows additional figures in pen, one of which is visible sketched in black chalk at the right of our sheet.

Romney was an extremely successful portrait painter; after Reynolds and Gainsborough, he is considered to be the finest society portraitist of the 18th century. By 1762 he had moved to London where he painted portraits and historical subjects. He quickly assimilated Reynolds s grand manner and by the early 1770s he had a considerable practice in London. By 1773 he decided to travel to Italy to acquaint himself with earlier

Italian masters. He became part of the thriving art scene in Rome where a number of artists from England – ­ among them Thomas Banks, Joseph Wright of Derby, Nathaniel Marchant, and John Browne – came in contact with the Swiss artists Henry Fuseli, Nicolai Abildgaard and Johan Tobias Sergel. This so-called Fuseli circle in Rome was enormously influential in the subsequent careers of many English artists, among them Romney.

The art that resulted from this group created what may be called Romantic Neoclassicism. It drew subjects from Antiquity, but depicted them within the framework of what came to be called ‘The Sublime , a vision of form designed to impress the viewer with the power of nature, of emotion or the fantastic. The activities of the artists of the Fuseli circle had a most profound affect on English painting and drawing from the later 18th century through the first two decades of the 19th century.

Our drawing clearly shows Romney s participation in the interests of the Fuseli circle.

Charon, the ferryman of souls across the River Styx to the underworld, is shown in heroic nudity, his face animated by a version of a Classical tragic mask. The supine figure of Psyche is sketched in black chalk at the lower right.

On his return to London in 1775, Romney s career resumed its upward trajectory; he was enormously successful as a society portraitist, but maintained an interest in myth and history painting until his death in 1802 after a long physical decline.