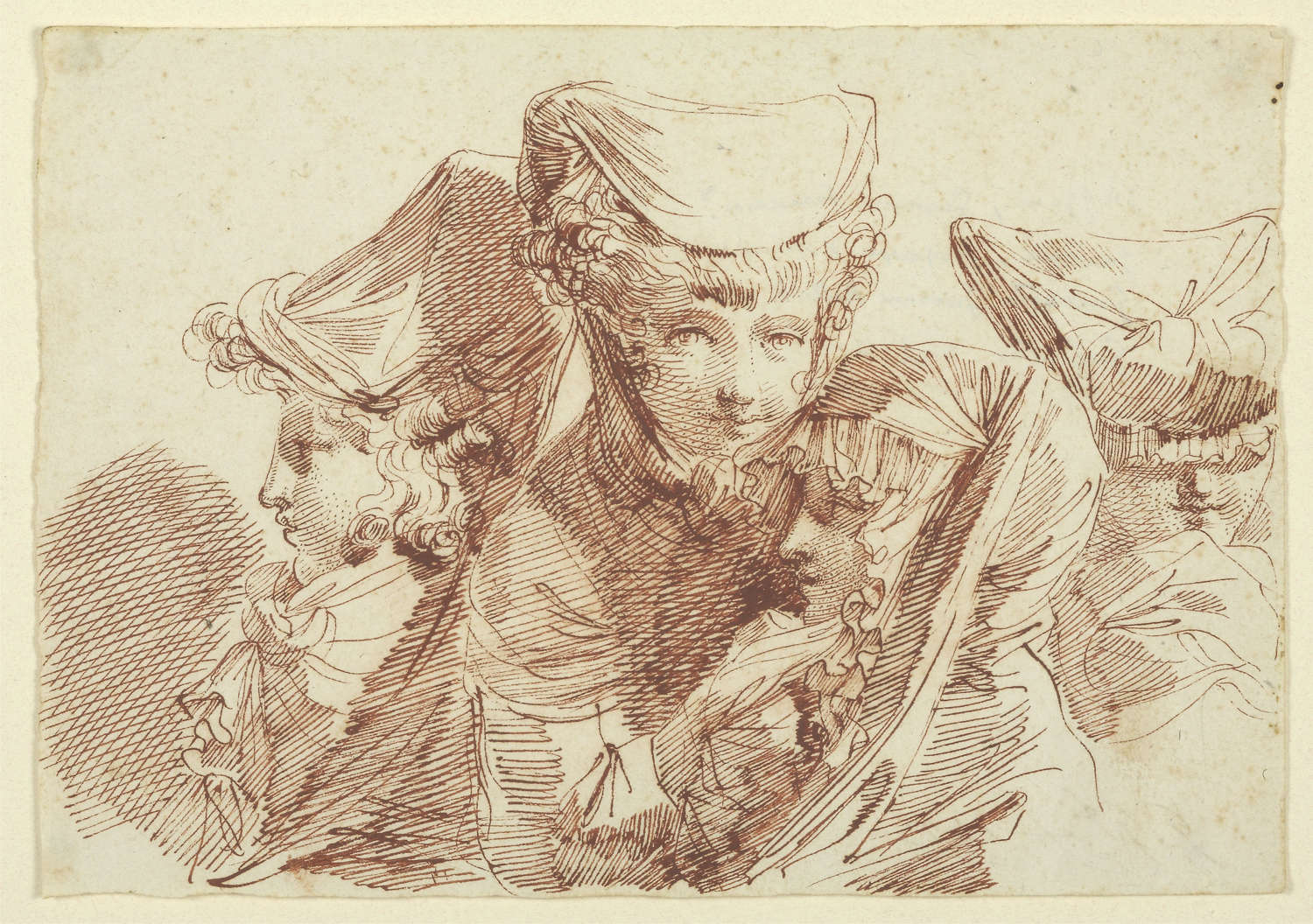 A Sheet of Head Studies.

Drawing in red pen and ink; 1795.  Signed with the artist's initials and dated verso in the same red ink in which the drawing was executed.

Gandolfi belongs to the Bolognese tradition of firmly constructed compositions and careful attention to figure study, as established by the Carracci at the end of the 16th and the beginning of the 17th century.  In this respect, Mimi Cazort has pointed out that the family should not be seen as ‘the last followers of the Carracci’, as this characterization suggests an artistic dependence, which was not the case.

Gandolfi’s adherence to this tradition should be seen as less a sign of artistic conservatism, but rather evidence of the suppleness and adaptability of the system of artistic education that had nurtured an interest in firm construction of form that characterized Bolognese art from the 16th century onward. The career of Gaetano constitutes a case in point. His work spanned the period from late Baroque Classicism to the Rococo and finally, Neoclassicism in Italy. He was remarkably successful in developing an original response to this important change in style and taste.

The Gandolfi brothers are among the most admired artists in Bologna in the 18th century. Gaetano, the brother of Ubaldo, was a very successful painter, sculptor, printmaker and prolific draftsman. Our drawing is, unusually, signed and dated by the artist and was executed at a point in time when Gandolfi had begun to emerge as a fully formed, confident, artistic personality.

As with the Tiepolo family in Venice, the drawings of the Gandolfi were highly prized from the time of their execution, and a large number have survived. Signed examples, however, are much rarer. Gandolfi also produced, almost surely for sale as independent works of art, studies of heads. These sheets frequently, but not always horizontal in format, show grouped heads. These studies are allied to the 18th century Italian interest in so-called teste de caràttere, depictions of heads as examples of facial types, or in the case of our sheet, models of elegance. Our drawing is particularly elegant and in a most unusual touch, executed in sanguine ink. By contrast, almost all of the drawings by Gaetano that we have seen are in brown or black ink. This red ink gives an added fillip to the elegant faces depicted.