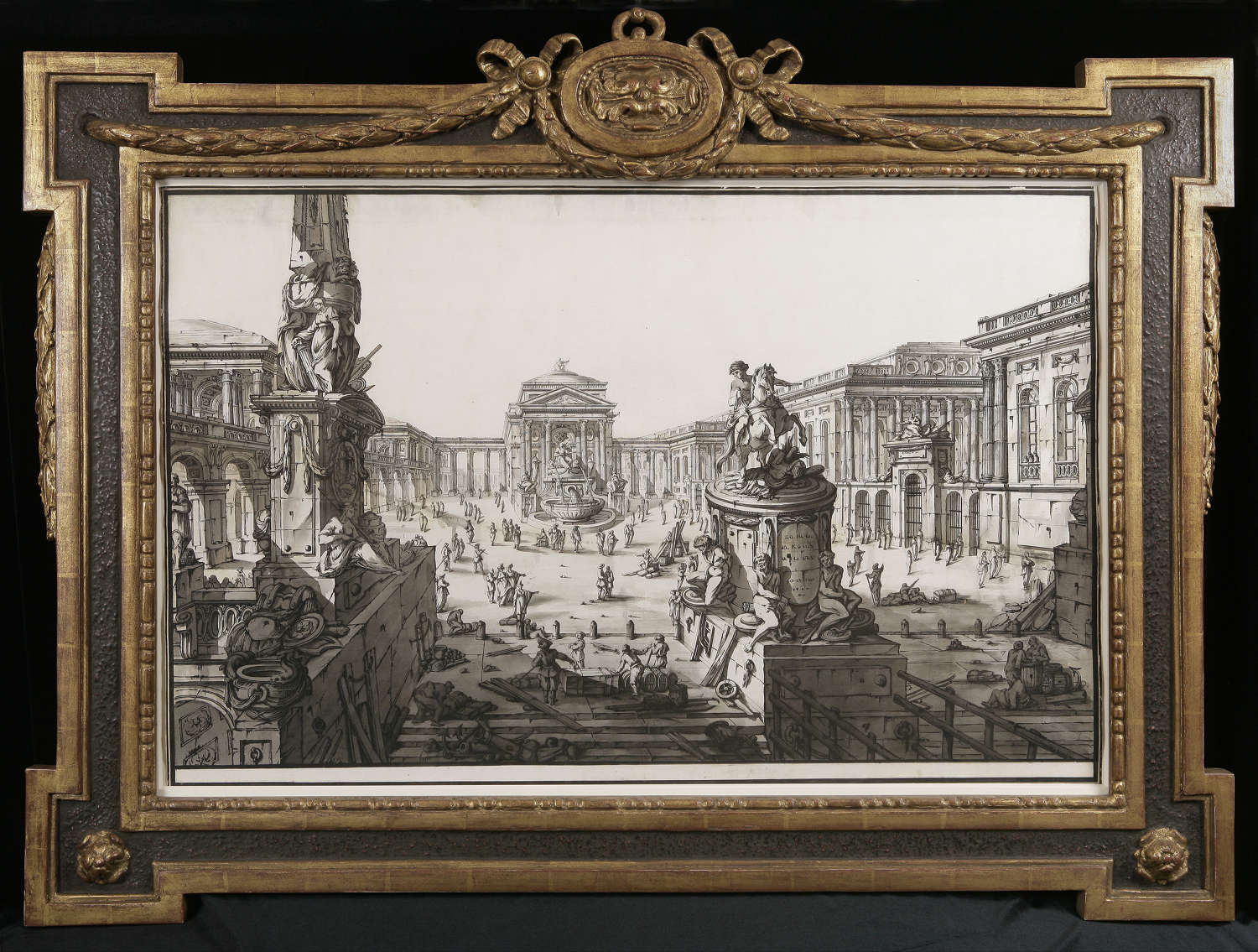 An Architectural Capriccio: A Vast Forum with Sculptural Monuments.

Drawing in black ink and wash over black chalk. In fine condition; some very slight staining and minimal losses to the sheet at the extreme edges, not affecting the image. In an antique Neoclassical parcel-gilt wood frame, very possibly the original frame; the frame regilded.

Le Lorrain was active as an architect, painter, engraver, and furniture designer. From 1739 until 1747 Le Lorrain worked and studied in Rome. During his stay in Rome he worked at the Académie Française and became acquainted with Piranesi and furnished designs for vignettes for Piranesi’s Opere Varie.  His designs for temporary architecture for the Roman Chinea festival in the later 1740s are notable examples of early Neo-classicism. Le Lorrain was supported by the Count de Caylus, one of the most influential French collectors and connoisseurs of the day and through him Le Lorrain was given a commission in 1754 from Count Tessin, the Swedish diplomat and collector, to design architectural wall decorations for his country house in Sweden.

Our drawing stands direct comparison with a drawing exhibited in Piranèse et les Français, which bears the partly legible inscription  ‘Louis... Lorrain...’ and there attributed to Le Lorrain. The author of the catalogue entry noted that the two other drawings cited, numbers 113bis and 113ter, showed similarities with architectural motifs used in the festival architecture of the Chinea festivals of 1745 and 1747.

The drawings cited above constitute virtual pendants to our sheet, with their boldly conceived perspective recession and above all, with their combination of crisp execution and dramatic presentation of massive architectural forms. It is noteworthy, as well, that the large size of our drawing compares quite closely with the drawings reproduced in Piranèse et les Français. The catalogue authors suggested that Moreau Le Jeune (1741-1814), who was with Le Lorrain in Saint Petersburg in 1758, might have been responsible for the figural elements in these drawings, which prompted the authors to describe the drawings as ‘attributed to’ Le Lorrain, an idea that now seems excessively cautious.

Whether our drawing should be dated to Le Lorrain’s stay in Rome in the 1740s or is a later work, perhaps dating to the artist’s arrival in Russia in 1758, when he assumed the directorship of the Academy of Arts at Saint Petersburg, is at this time difficult to ascertain.  Le Lorrain was engaged to teach perspective and stage set design, among other subjects, at Saint Petersburg before his untimely death in 1759. Our drawing with its very high finish and large scale must have been conceived as a virtuoso presentation piece of the very subjects of which he was an acknowledged master.