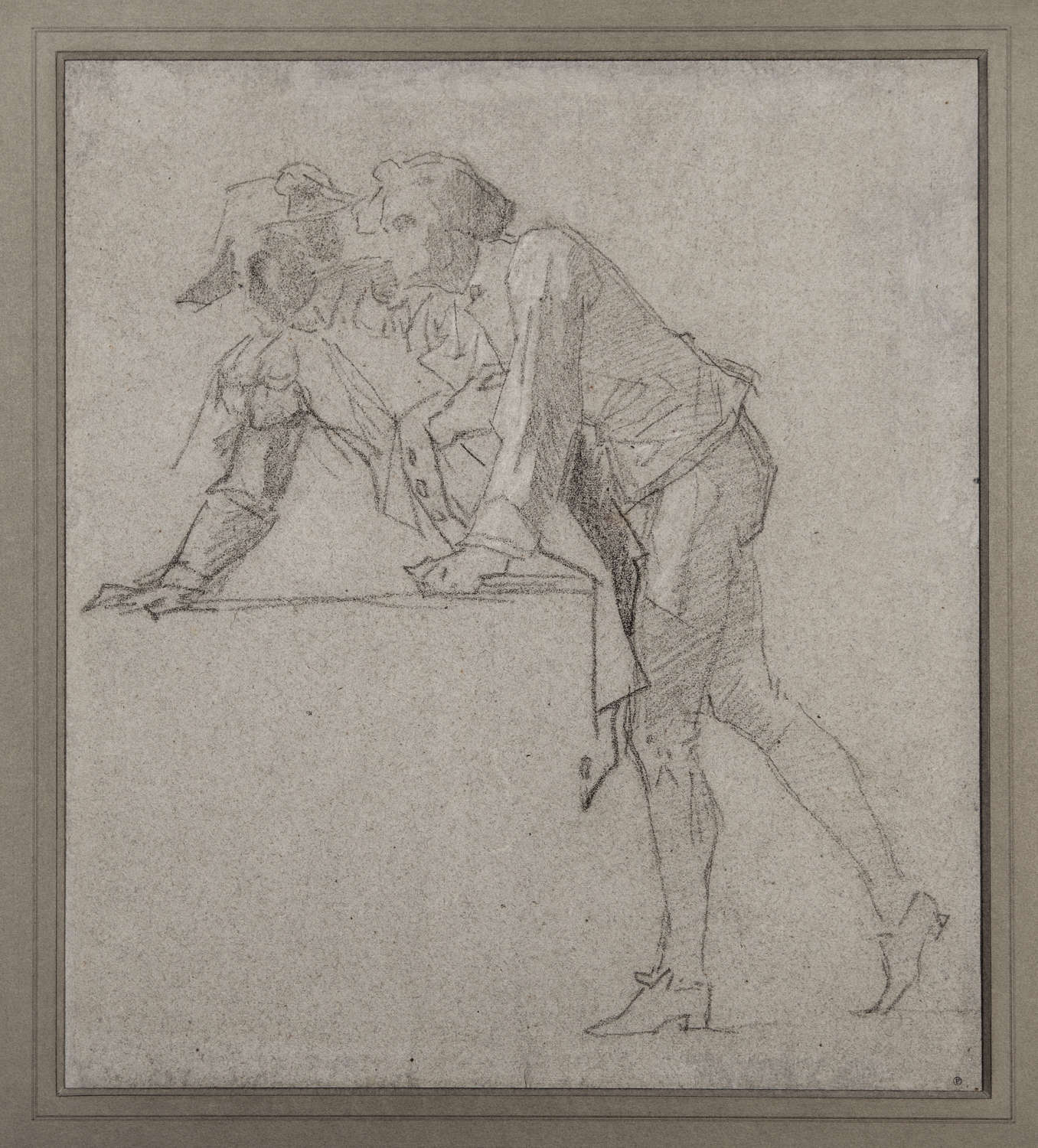 Study for The Enrollment of the Volunteers, 1792.

Our drawing shows the two volunteers at the upper center right of The Enrollment of the Volunteers 1792, opposite the recruitment officer seated at the desk. The two figures of the volunteers lean toward the recruitment officer, one with his hand on his breast in a telling gesture of allegiance. The positions of these figures are filled with latent energy and contribute powerfully to the drama of the subject.

Another study, showing the figure of the recruitment officer facing our two figures, was with us in 2005. Our sheet is one of the largest and most impressive studies for the painting to appear in recent years.

Couture was by 1830 a student of Baron Gros with whom he remained until 1838. His remarkable abilities notwithstanding, official honors in the form of a Prix de Rome eluded him. Couture could never accommodate himself to the compromises inherent in the official system of French pedagogy and art patronage and thus remained outside the system for his entire career. His passion for historical subject matter and his use of history painting as contemporary political criticism was much admired, even in official circles.

His monumental painting Romans of the Decadence, completed in 1847, was a remarkable success and a perceived attack on the July Monarchy (1840-48). Shortly after the completion of this painting, Couture began work on The Enrollment of the Volunteers, 1792. Although never completed, the picture was to evoke a heroic moment in the recent history of France in which all classes of French society united to defend the young republic from foreign attack. The virtues of patriotic self-sacrifice, the theme of this grandly conceived image, are demonstrated in our drawing.

The accession of Louis-Napoleon dramatically altered the political climate of France and Couture’s history painting could no longer promise the unification of the culture around a virtuous historical past.  Couture only fitfully received imperial commissions, and he turned to private patronage for the balance of his career. Couture was, as well, a gifted and influential teacher. Among his pupils were Édouard Manet and Pierre Puvis de Chavannes, and the Americans John Lafarge, William Morris Hunt and Eastman Johnson.

The unfinished painting is at Beauvais, Musée Départmental de l’Oise. A large scale oil sketch for the painting was the subject of an exhibition at the Museum of Fine Arts, Springfield, MA in 1980.