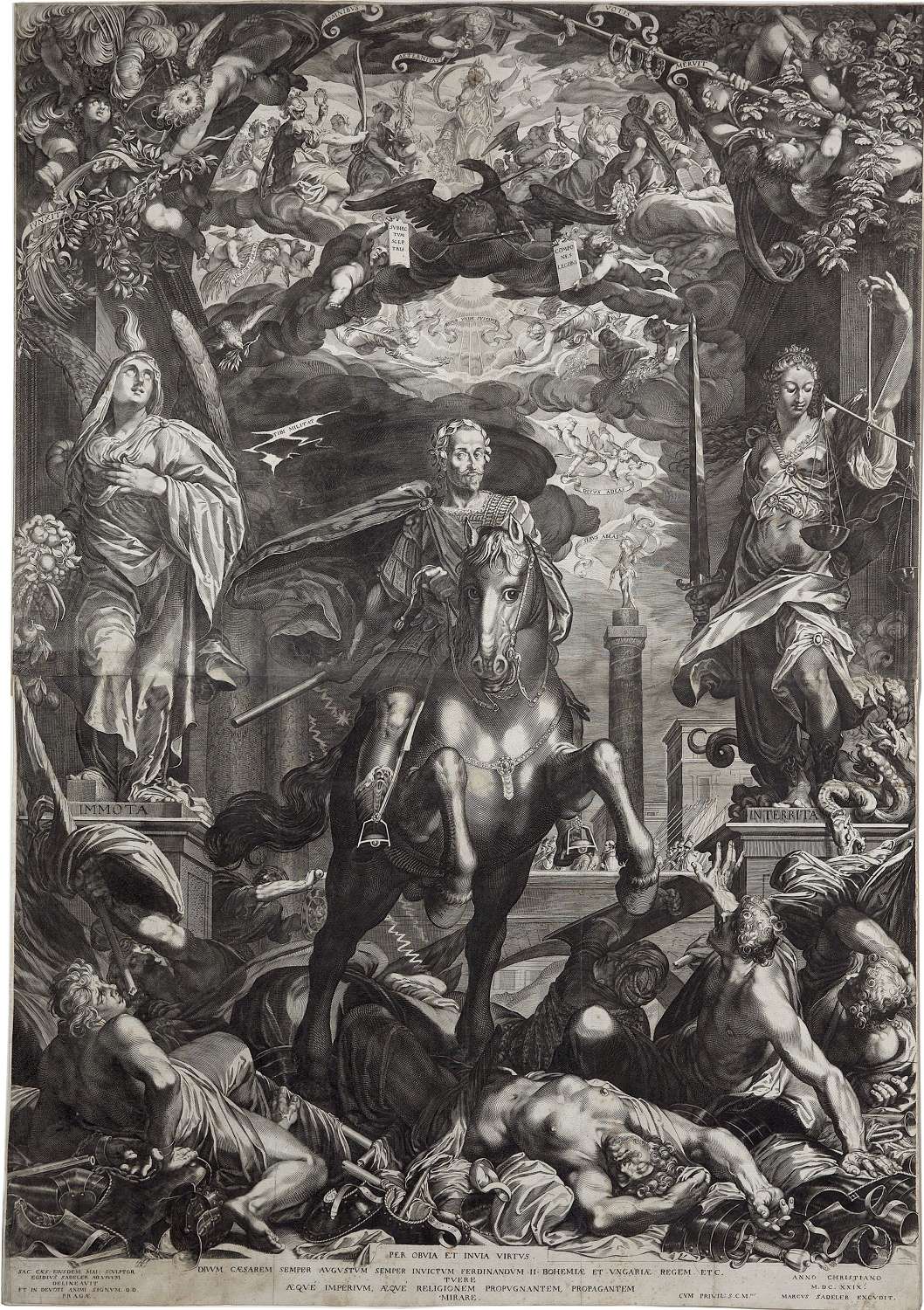 The Emperor Ferdinand on Horseback.

One of the largest Mannerist engravings and another of the very pointedly political pieces of Ferdinand’s Imperial self-portraiture.  In 1619, after the death of Emperor Matthias, Ferdinand came to the throne in a period of enormous religious and political turmoil. He allied himself with the Catholic faction and reigned until 1637 during the savagery of the Thirty Years’ War.  Our equestrian portrait, very rare, perhaps on account of the large size, is dated 1629, the year in which the emperor completed his triumph over Protestant rebels.

Even if Ferdinand showed little of the broad-ranging interest in the arts as did his cousin, Rudolf, who ruled as Emperor Rudolf II (Holy Roman Emperor 1576-1612), he was ready to use the brilliant group of artists that his cousin had cultivated and supported. Among these was Aegidius Sadeler, the principal figure in the Sadeler family, who although from Antwerp spent most of his career in Prague, and worked successively for  Rudolf, Matthias and finally Ferdinand. His firmly constructed figures and bold compositions were well suited to his role as one of the chief Imperial propagandists.

It is important to remember that the equestrian portrait was central to the conception of Imperial authority, which was based at least in part on military prowess and leadership. The equestrian figure whether in painting, sculpture or graphic images, was a constant in European art from the Classical period and constituted the ultimate glorification of military and thus political authority. This engraving must also refer to Ferdinand’s physical bravery during the most precarious moments of his struggles with the Bohemian Protestants.

1. Ferdinand’s cousin, Emperor Rudolf II (Holy Roman Emperor 1576-1612),  was arguably the most brilliant patron of the arts of his day, under whom Prague blossomed as one of the artistic capitals of Europe. He was uninterested in politics and governance, and  largely ignored the burgeoning conflicts between Protestants and Catholics in Bohemia.